Center of worship Protohellenic culture, Bay City (Cross), which is an ancient sunken city.
Of all the discoveries found during excavations in the cave that fell Loizou, evidenced clearly that this port esychnazeto from the first Mycenaean period to the Greek and Roman. 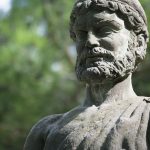 OdysseasDiavaste the ‘Ulysses’ prayer’ in the bust of Odysseus in the park is the square of the village of Cross.

Jewel of the village of Anogi church built in the 12th century with magnificent frescoes and Venetian-style bell tower.

In the village of Anogi are scattered huge boulders called ‘menhirs’.
The Araklis is the most important and periergoteros these oddly shaped stone blocks.

The huge monolith is located just below the houses of the village has a height of 9m and rests on rock that is wider than the pedestal.
The shape is tapered around the surfaces of the drilled east and west.
Gyrus diavrosiogeneis found in rock, especially in the northern area and upwards ending in a sharp peak.Shows no such regularity that the curious rock, so at first sight think that this is artificially treated stone laying obelisk, constructed by man and not a natural rock that took the form of perirgi disintegration.

Another remarkable boulder is it called Kavellaris (because it looks like a knight). 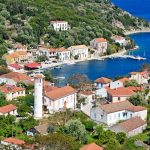 KioniParadosiako Ionian village with a picturesque harbor, where dozens of yachts moor in summer, once a refuge and a base of pirates. The entrance to the Gulf decorate three ruined windmills.

The columns on the right side of the harbor survived a small part of the stone house where he lived until the revolution of 1821 hero George Kara.

VathyProtefousa the island, the whole village is the city landmark, because it preserves the old Ionian domisis and is a traditional settlement in 1982, with exceptionally beautiful natural bay in the closing lap of the islet-Lazaretto.

Cave of the Nymphs

The cave is also called ‘Marmarospilia’, with two entrances, one for the gods and mortals in a wonderful and stalactites, which according to Homer, Odysseus hid the gifts of the king of Corfu Alkinoos.

From Perachori path leads to the ruined medieval Paleochora, where there are churches with wonderful Byzantine frescoes.
Alalkomenes

At the top of the hill eagle is the ancient Acropolis, which the locals call it the palace of Odysseus.It may be the city of Alalkomenes can and ‘Ithaca State’ of Aristotle.

Near the Cross in the caps, place the town of Ulysses, according to Homer’s description, that was a point that was overlooking three seas and surrounded the three mountains.Here is the archaeological museum of the Cross, which sets out the findings of the Mycenaean and Corinthian period.

The Holy Monastery of the Net, pilgrimage and a reference point for everywhere Ithacans is built in south-eastern tip of the Homeric terms Nirito in a nice corner, about 600m from the sea and 15 kilometers from the Deep. The life of the monastery begins around 1696.

But history of the image of the Virgin Mary, is still the oldest, says Father Theodosius Dendrinos the second edition of his book ‘The Monastery of Our Lady of Clear Ithaca. “The name ‘Net’ is derived from the word ‘net’, which in local dialect means the twigs and small shrubs are cut and burned to purify a place. Since then the holy image of the Virgin Birth of a miraculously found inside the burning net, named ‘Kathariotissa.

The surviving today tradition says that shepherds Epirus persecuted by the Turks and Albanians have left their homeland and went to Ithaca where they settled on Mount Nirito position Mazos”400”about opposite the present monastery.Within a few belongings, they discovered they lacked the icon depicting the Virgin of Genesis.

Some night, seeing that there is now the church of the convent, a blinding light. Despite all the surveys at that point they found nothing.The same phenomenon was repeated for several nights, so I thought to cut and burn the bushes and twigs to clean up the site to see what happens. When the fire went out saw a picture without being burned.So we all recognized the image of the Genesis of the Virgin, who had the continent. At that point they built a small church to put in the icon. Another version of the name that was founded by followers of the Catholic cult of the Cathars. According to the archaeologist-author W. GELL in his bookGeography and Antiquities of Ithaca, “says the site was dedicated to the god Apollo. Another view on the name comes from the author by Rita Tsintili-Vlisma where he says the point is built the Church of the Cathars, there was a pagan temple before rather the goddess Athena.One of the many nicknames of the Goddess was”Net”Just beyond the convent, the bell tower where the ground floor is the chapel of St. Constantine and Helen. During the years of occupation and mainly by the earthquake of 1953 destroyed the steeple, where it was rebuilt.The view from one location of the Belfry is unique.It seems the southern part of the island, part of the eastern part of Kefalonia, in-depth Echinades left the islands, the west coast of Aitoloakarnania away in the background with good visibility the coastline of the Peloponnese, Zakynthos and right.The image of the Virgin Mary attributed to Luke the Evangelist and represents the birth of eotokou. In early 1993 installed in the monastery the monk Theodosius Ithakisios the world by Elias Vlismas who comes from New Skete Monastery on Mount Athos and offer its services thanks to the Virgin Mary.The Kathariotissa is a patron and protector of the island, celebrated majestically on 8 September each year. Bibliography: “The Monastery of Our Lady of Clear Ithaca ‘(second edition) of his father Theodosius Dendrinou.

(Metropolitan). The Church of the Virgin Mary in Linovrochia, as they say, was built in 1800. Existed a small temple which grew for the needs of parishioners. He has a wonderful ologlyfo wooden screen, post-Byzantine art of 1793, built by Metsovo and the grand old bell of 1820. 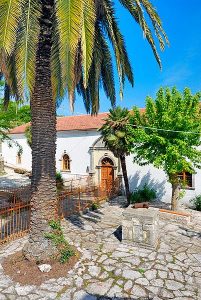 The Church of Anogi

The Church of Panagia in Anogi Ithaca, built at an altitude of 500m, is one of the largest, oldest and largest temples in the Balkans. Basilica is a large (30m long and about 10m wide) and as said partially built 700 years ago.Inside the temple is of great interest since it is the entire wall covered with Byzantine style and for this reason has been declared by the Ministry of Education since 1959, as listed historic monument.Wonderful images of Saints and Angels rare forms of art, show the incomparable talent of the painter of the time of Antonius on Agrafa flourished in the middle of the 17th century. The artist came from the school of Vrangianon Agrafon which kept the Byzantine tradition.The figures of saints and attitudes are standard and their position in the Church given by the inspiration, color and expression which gives the painter. According to an inscription on the stone temple, Anthony Agrafon on images delivered in 1680 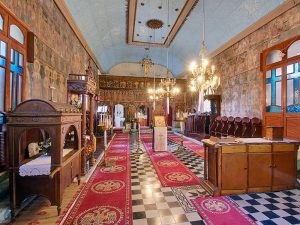 Church AnogisO church was badly damaged in 1953 during the devastating earthquake that period.Shortly afterwards, restored with the generous care and assistance Ithacans owner Panos Gratsia and paintings preserved by the conservative Mr. Anastasios logs.With the successful intervention of the conservator, renovated and restored all the visible wall, which the North side and South side of the nave, are arranged in five parallel zones.

In the first zone are simply decorative images.
The second zone, starting from the top floor of the church shows a series of shear Saints.Part of this area of the west wall opposite the main entrance, reminiscent of a first impression of the mosaics of San Vitale in Ravenna and frescoes in Meteora. The mosaic of Theodora in Ravenna in uniform, consistent with the hagiography of St Constantine and St Helen’s Church in Anogi.In the case of Anogi between Constantine and Helen, the Icon insert a double-cross that is now widely known as the Cross of Lorraine, emblem of General de Gaulle during the Second World War.

Overall murals are continental style influenced by the Cretan school and perhaps the famous mosaics of the Byzantine churches of Ravenna.

The Old Cathedral on the island

The frescoes of the church is a Byzantine hagiographic work of magnificence, which emphasizes the culture of Ithaca, one hundred years after the conflict Cross and Crescent (Battle of Lepanto 1571) since the Anogi was the capital of Ithaca and the Church of Panagia HTif the island’s cathedral.

Stone temple built in the visitor reads the following inscription, which is a historical testimony to the antiquity of the church:

The Dodekaporto the loft and the belfry

Noticeable for visitors is the wooden dodekaporto Twenty of his time, built the earthen pitchers for the acoustic of the church, the old stone monuments and the two-storey loft in front of which attend the Divine Judgement.

Finally, by imposing and beautiful genuine niritia stone stands in spite of the time the imposing Venetian bell tower, a symbol of the village and pilgrimage sacred pole of the Assumption, celebrated on August 15.